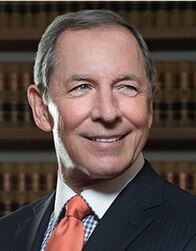 Craig McClellan, who recently earned his 13th consecutive selection to Super Lawyers Magazine, has been ranked Super Lawyers’ Number One Attorney in San Diego across all areas of practice publicly available for hire. The distinction is yet another testament to Craig’s reputation among the country’s most accomplished and respected trial lawyers.

Inclusion in the annual list of Super Lawyers, earned by just 5% of all active lawyers in the state, is a significant accomplishment in and of itself. Being “Ranked Number One” out of all attorneys in San Diego practicing in more than 70 different areas of law, is a truly admirable distinction that speaks to Craig’s exceptional legal talent, and positive reputation among his peers.

Since founding our firm over 30 years ago, Craig has built The McClellan Law Firm into one of the nation’s most respected civil trial law practices. Known for his work in high-profile, high-stakes personal injury, product liability, and business litigation cases, Craig has obtained more than 125 verdicts and settlements in excess of $1 million each, and is the first and only civil injury attorney in San Diego to be invited into the Inner Circle of Advocates – an elite group of the nation’s top 100 plaintiffs’ attorneys.

Alongside Attorney Conor J. Hulburt, recently named among Super Lawyers’ list of Rising Stars, and our staff of caring and compassionate professionals, Craig ensures clients receive the personal support and guidance they deserve during difficult times. His unceasing work ethic and focus on a limited caseload further ensure victims and families have the firepower they need need when fighting for justice and compensation against even the largest corporate defendants.

Learn more about our team and the types of cases we handle, or call (619) 215-1488 to speak with an attorney about your potential case.